I know it has been quite a while since I’ve posted Part 1 of this blog about Digital Models with a simple station. Since then I spent time evolving Part 1 into the the Amateur Radio Using Digital Modes Workshop I ran at HOPE XII this past summer. As part of the preparation for the workshop I expected to have Part 2 completed and posted before then but I ran into technical issues which I will explain at the end of this post. Before continuing, I highly recommend you review the workshop material since it contains updated material since Part 1 plus providing a deeper dive.

The exercises in Part 1 and the workshop focused on digital modes typically used for keyboard-to-keyboard communications using a piece of free cross-platform software called Fldigi. On HF we use SSB for digital modes allowing us to hear multiple signals share a small piece of spectrum with as little as tens of hertz of separation. The waterfall below shows three PSK31 signals who only differ in audio frequency.

FM demodulation exhibits a phenomenon known as the capture effect which has us only hear the stronger of two signals within the same frequency. We either live with the capture effect when using FM or develop digital modes that are carrier sensing to avoid collision with other transmissions. Amateur Packet Radio (aka Packet Radio) is a digital mode that addresses the collision problem.

Packet Radio, is a digital mode native to VHF/UHF that uses the AX.25 protocol.The AX.25 protocol addresses transmission collision through a media access control approach called Carrier sense multiple access with collision recovery (CSMA/CR.) AX.25 supports connected and connection-less modes of operation akin to the use of TCP and UDP respectively in TCP/IP.

Packet Radio was historically implemented using dedicated hardware called Terminal Node Controllers (TNC). A typical station would be a dumb terminal or computer running terminal software serial connected to the TNC and in turn connected to a radio via the microphone and speaker ports.

Because the data rates used are 1200, 2400, and 9600 baud the services running on AX.25 are limited in providing in any media rich experience one is accustomed to in surfing the Internet. Still it is popular for emergency communications as well as popular service called Automatic Packet Reporting System (APRS) which we will cover here.

APRS is a digital communications service that provides a geospatial view of activities (Bulletins, Messages, Alerts, Weather), other stations (mobile or fixed), and points of interest for a given area. APRS operates in connection-less mode. 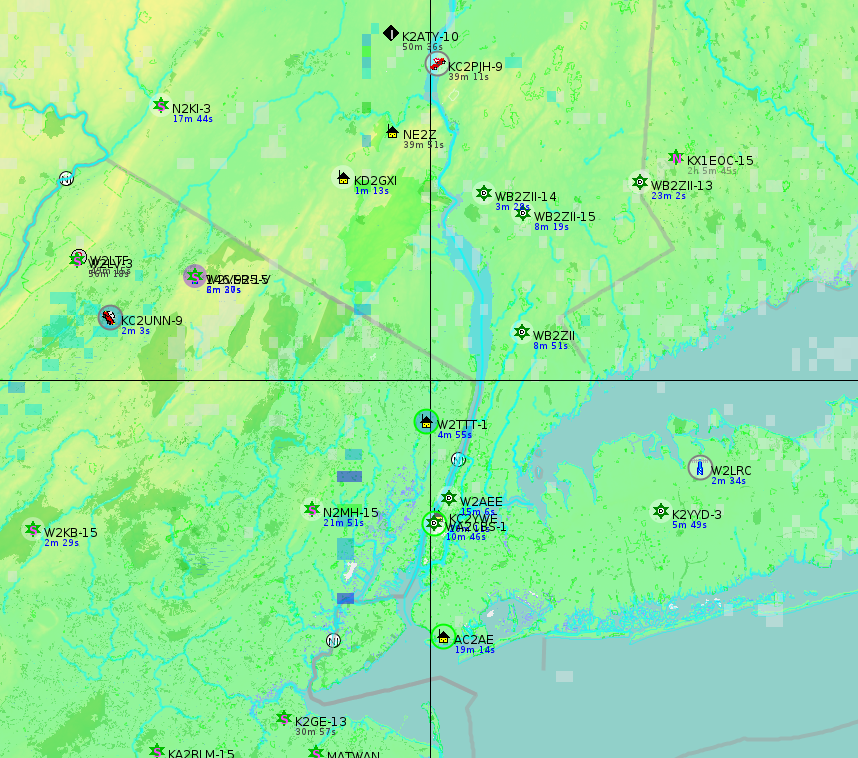 APRS packets are transmitted for all stations to hear and use. Digipeaters form the backbone of the APRS system using store and forward technology to retransmit packets. All stations operate on the same frequency with packets moving through the radio network from digipeater to digipeater, Packet movement is similar to distance-vector routing protocol dropped after so many hops.

What we will be doing

We will continue to use the VHF/UHF stations we setup in part 1 and in the workshop but add two software packages. The first software package is Dire Wolf which will serve as our TNC serving up the AX.25 protocol stack. The second software package we will be using is YAAC (“Yet Another APRS Client”) to run APRS. Again, all software is cross-platform.

In our simple VHF/UHF station, we use the Baofeng Audio Cable between the USB sound device and the radio. Since there is no separate PTT connection, we continue to use VOX to key the radio.

Windows and OSX users can download the software from the GitHub site and run the executables. Linux users install Dire Wolf by going into your home directory, cloning the GitHub repository and build the executable.

The last command will put the following sample conf files into your home directory. We will only be working with direwolf.conf

No matter which type of installation, make a back up copy of the direwolf.conf file and then make the follow edits with items in bold adjusted to your specific situation.

With ADEVICE you are setting Dire Wolf to use the USB sound dongle and not the internal soundcard on your laptop. The ADEVICE name will vary across operating systems. What is displayed above is for a Linux laptop. MYCALL is followed by your Amateur Radio callsign. PBEACON needs to be updated with your location, power, and height above ground. Dire Wolf provides sound modem capability only (with an exception mentioned later.)

Since we are not setting up a dedicated station, we will manually start and run Dire Wolf as a background application. Depending on the OS either double-click on the icon or run from a terminal command line in the same directory the direwolf.conf file is in.

YAAC is a Java application for monitoring and connecting with the Automatic Packet Reporting System (APRS) network. We will be using YAAC as a stand-alone APRS client. While YAAC’s map rendering does not depend on Internet connectivity, it is advisable as part of the initial configuration to be connected to the Internet to use alternate highly detailed maps (ie. topography detail.)

Because YAAC is written in Java, you will need to have the Java Runtime Environment (JRE) version 7 minimum installed on your system. You can test whether you have the minimum version of Java installed by getting a command shell on your system and issuing the command

Create a separate folder/directory to run YAAC in. Download YAAC into that folder and unzip/uncompress it there. At a command line and within that folder run the following:

YaaC is well documented with the YaaC website itself providing no better source of getting you up, running and experiencing APRS quickly. It is important to insure during setup that you are connected to the Internet to download maps for areas you will be operating from. APRS itself is just communicating data about the stations/devices themselves and location data.

I’ve been experimenting on and off with Packet Radio using various sound card modem software  packages for a few years now. This includes following best practices in providing circuit protection between the sound cards and the radio. For sound card interfaces I keep a couple of of Easy Digi Kits on hand for experimentation, they cost as little as $8 USD. For more permanent operations I have two RigBlaster Nomics. Since pinouts vary among radio I like using the Nomics since wiring can be changed via jumpers rather than rewiring an Easy Digi Kit.

This series of posts and the workshop were focused on providing new hams a path of least resistance providing a “quick win” to experiencing and enjoying Amateur Radio at the lowest price point possible. Besides cheap hardware and using sound modem software, to make the outcome possible I would need to use VOX as the universal method to key transmit instead of PTT.  Packet Radio services that use connection-less modes like APRS are tolerant in the use of VOX but traditional Packet Radio services that use connected mode like BBS and direct chat are not.

The Dire Wolf User guide provides a rich amount of content on the issues of using VOX in Packet Radio. After a few years of trying to get make reliable connected mode connections using VOX I can say DON’T WASTE YOUR TIME.  This is the reason not only in the delay of Part 2 but why I did not include Packet Radio in the workshop at HOPE XII.

I’ve been asked by those who attended to present the workshop again should there be a HOPE XIII in 2020 and include Packet Radio. I plan to do that and include connected modes by coming up with an easy to build sound card interface for under $20 USD that supports PTT use with Boafeng hand-held radios and their equivalents. I look to complete the interface in the coming months and post the results and further experimentation here results here.